Road Location: The Mahakavi Pampa Road is located in Bangalore, Karnataka. It forms a major link connecting KR market, Shankarapuram, and Basavangudi. Its PIN code is 560018. It is just 2.2km away from the Town Hall.

Remarkable poet, precise strategist, evocative translator and pugnacious warrior are some of the words that describe the Great Adikavi Pampa. Despite the existence of a few Kannada poets before Pampa, he is widely regarded as the first Kannada poet as his work overshadows that of his predecessors. He is also considered to be one among the three jewels emblazoning the scenery of Kannada literature, the other two being Ponna and Ranna. Even today, a road in Bangalore is named after this illustrious personality. The strong blend of Margam (Sanskrit) and Desi (Kannada) is projected in his every line. Modern Kannada poets still pay homage to this great soul, who showed them the path and took the first steps towards establishing Kannada as a language of sophistication and emotion.

A market is built through intellect and logic, infrastructure and justice. But it is art, culture, traditions, music and poetry, which makes a mere place of exchange of goods and service, a city or a state. Karnataka captures its on unique niche in the mosaic of a vast country like India by virtue of its breathtaking culture. The mellifluous language Kannada, lends honeyed semi tones to the literature presented in it. But it is not often that an average resident of Karnataka contemplates the achievements of the remarkable individual responsible for elevating Kannada to the status it now enjoys.

Mahakavi Pampa is one of the greatest poets who have walked the earth. Many historians and connoisseurs believe that Pampa was the first Kannada poet, hence he also known as Adikavi. He is one of the three gems of Kannada literature, the other two being Ponna and Ranna. He is believed to have been born in Annigeri in Karnataka. His prowess in prose and verse led him to become the court poet of the Chalukya king Arikesari. Another little known fact about Pampa, was that he also served as an army commander and hence his interest in the Mahabharata is but natural. He also commanded great dexterity in medicine, music and art.

Pampa was initially brought up as an orthodox Hindu. However he embraced Jainism along with his entire family. His father Abhirama Devaraya played an important role in shaping Pampa’s ideas on politics and materialism. In spite of the great riches that followed his every epic, he did not hoard wealth and gave away most of it to the needy. This quality of the educated and artistically inclined intelligentsia seems to carry to this day.

Pampa was considered to be the disciple of Devendra Muni. His prodigious talent and unparalleled skill was polished by his Guru. Many of his writings reflect his devotion and gratitude towards his teacher.

True to his religion, his first masterpiece was a translation of a Sanskrit poem written by Jinasena, a Digambar monk. The book was called Adi Purana. This literary marvel was based on the story of the first Tirthankara, Rishabhadeva. This was a momentous achievement because translation wasn’t a very well developed skill in that period. Pampa recognized the need for such translations, in order to bring the truth of a religion to the people.

Another of his immensely popular books is Vikramarjuna Vijaya also known as Pampa Bharata. This book is an adaptation of the Sanskrit Mahabharata and has been written in a style known as Champa. His blend of classical Sanskrit and Kannada has made the epic accessible to all. Pampa has also taken the freedom to change of few aspects of the original. He associated Arjun with his patron King Arikesari and hence in Pampa Bharata, Draupadi is married only to Arjun and he ascends the throne after the battle. He also supplies Arjun with many of King Arikesari’s own titles. 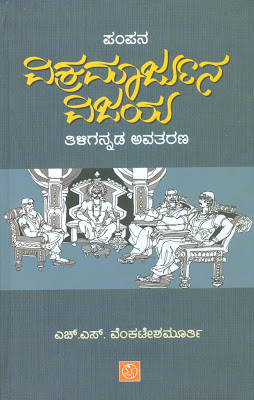 Pampa helped bring in Classicism, Jain and Hindu mythology to Kannada. Adikavi Pampa laid the foundation of Kannada literature on which exquisite castles are being built today.